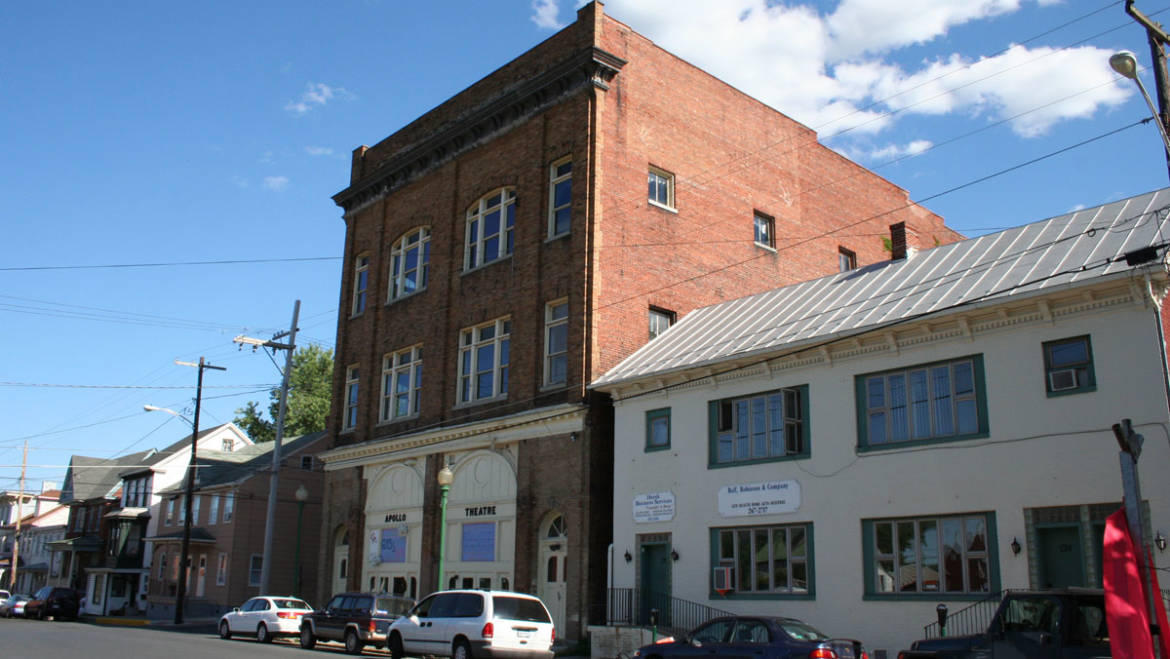 Theatre! Just the word alone evokes thoughts of Broadway and the like. This age old stage of culture and entertainment still stands strong in spite of all the new age alternatives for amusement that are available today. The fact that it continues to thrive in our society is a true testament to its importance and value to us all. Although we would all enjoy seeing a Broadway show, there is no need for us to travel to New York City in order to enjoy quality theatre at its finest. Martinsburg West Virginia’s Apollo Civic Theatre is one of the areas finest and most historic theaters conveniently located at 128 E Martin Street in downtown Martinsburg.

As with all landmarks in the Martinsburg area, the Apollo Civic Theatre is bathed rich in history. This majestic theatre has most certainly stood the test of time as well as survived many major and historical events. Holding its own through two world wars and the Great Depression to name a few. Conversely, the Apollo has also enjoyed at least one economic up swing. This magnificent building is not only beautiful but also houses one of our areas finest theatre organizations as well. It is important to note that the theatre is a non-profit organization and depends fully on donations, fundraisers, and patron and business membership support. Keep in mind the immense expense required to properly run such a property; the utilities alone are a huge chunk of change, let alone the cost to bring quality shows and entertainment to our community.

Those of us who are familiar with the Martinsburg, WV area know that the end of the Nineteenth and the early part of the Twentieth centuries was a rather sparse period for the city and surrounding area. Honestly it was the local theatres that were the saving grace. These theatres included both motion picture houses and show places such as the Strand and the Central Opera House but by 1910 they were both so dilapidated that they needed to be replaced all together. Ultimately the Strand was torn down leaving only the Central Opera House, which at the time was functioning as a show place. With the building in serious disrepair, it was in the process of being torn down as well. Sadly during this time, Edgar Thorn, died both suddenly and in a tragic manner leaving his parents Harry Peter Thorn and Mary Elizabeth (Livers) Thorn in much sorrow. Mr. Thorn was especially distraught over the death of his son leading his wife Mary to encourage him to get involved in a project to take his mind off of things. And so he decided to replace the Central Opera House as both he and his wife saw the need to accommodate the entertainment needs of the community in downtown Martinsburg.

This new building would house such things as motion pictures, plays, touring shows to include Vaudeville, comedians, music groups and singers. It would also serve the community by providing rooms large enough to accommodate such things as dances, balls, cotillions, and wedding receptions. They even made allowances for conventions, business meetings, style shows, and private schools such as dance and the like. And so Mr. Thorn commissioned a local architect by the name of Chappie Kent to draw up plans for the grand, new facility. Kent, in turn, commissioned Washington D.C. architect Mr. Reginald Geare whose design expertise was theatres. One of his claims to fame was his design of the grand Knickerbocker Theatre in Washington D.C. Unfortunately the roof of the Knickerbocker caved in, killing a number of theatregoers. This tragic event, and the issuing mental anguish it caused, ultimately resulted in Mr. Geare committing suicide, in spite of the fact that he was deemed to be not at fault.

Mr. Thorn obtained ownership of the property located on the corner of East Martin and Spring Streets on March 9, 1912. Completed in 1913, the newly constructed theatre came complete with a full basement, which was used primarily for heating and storage through the years. The main auditorium housed on the street level first floor was and is used for live performances, motion pictures, and conventions. It is here that one can still find the expansive balcony. The “Roseland” or second floor and “Thornwood Hall” on the third floor are large rooms that were designed to provide ample space to hold social affairs. A gala was held for the theatres grand opening on January 19, 1914. In 1920 Mrs. Mary Thorn purchased the land located behind the theatre allowing for the much-needed expansion of both the stage and orchestra pit. This allowed for a much larger 35 by 50 ft. stage with a proscenium. Also adding a 50 ft. fly loft with cat walks and pin rails and an overhead Grid System. This also afforded the theatre such additions as proper dressing rooms and a door located to the left of the stage.

With this the Apollo Theatre became the best and largest theatre in Northeastern West Virginia, allowing its number of live productions to increase dramatically. The theatre routinely housed all manner of Vaudeville shows and the second and third floors had a constant flow of people in the form of dances, receptions, and graduations. Over time the theatres management changed hands numerous times and the Apollo has enjoyed appearances as well as performances from a number of well-known celebrities. Will Rogers came to the theatre to open his movie “State Fair,” Tex Ritter (father of the late John Ritter) and many other Hollywood cowboys came to entertain the audience before their movies were shown. Even classical musicians such as the Great Rubinoff have graced its stage. Arriving at a late hour in Martinsburg, Rubinoff was found sleeping in the hotel lobby snuggled up to his Stradivarius tucked under his arm. This event actually made the local paper.

A Marquee was added to the theatre in 1937 but unfortunately in 1987, the lethal combination of time and a heavy rainstorm caused the structure to collapse and has yet to be replaced because of expense. Over the years the theatres name has changed several times. From 1936 to 1939 the theatre was owned and operated by The Community Theatre Group organization and was dubbed “Martinsburg Little Theatre”. In 1939, just before the start of World War II, it was incorporated and became the “Berkeley County Civic Theatre”. From the 1940’s through the early 1970’s the establishment functioned as a movie house and was known as the “Town Cinema” during that time. In the late 50’s the upper levels stopped being used and became dilapidated as a result. In 1989 the name was once again changed to the Apollo Civic Theatre, which it remains to this day. The community theatre group organization that now owns and operates the Apollo Civic Theatre was started in 1936. They rehearsed in a house on West Race Street and held their performances at the Martinsburg High School Auditorium.

During World War II the group was almost inactive because of the loss of the majority of its male members. In 1971 however, a group of the organizations original members brought it back to life as a reading theatre group. In June 1972 a collection of community members participated in the “Echoes from the Valley” which was presented at Corbourn Field as part of the bi-centennial celebration in the area. This served to add new members and revitalized the group allowing them to present larger productions.

“Oklahoma” was the companies’ first Live Theatre production and was performed on the stage of the then Berkeley County Civic Theatre in corporation with the building owners, Elwood and Margaret Lane. After the Lanes purchased the Berkeley Plaza, which came with a movie theatre they decided to sell the Thorn building and the Apollo Theatre, housed within. So in 1975 the community theatre group purchased the premises from its previous owners and embarked on an intensive renovation project. The BCCT was added to the National Register of Historic Places in 1979. To date the Apollo Civic Theatre has been used in numerous movies such as Ted Turner’s ” God and the Generals” in which it was fashioned to look like two different famous theatres, one being Ford’s Theatre in Washington, D.C., one of the movies premiers was also held there. The Discovery Channel and other independent filmmakers have also used the theatre as a set. It has hosted West Virginia Public Broadcasting’s ” Mountain Stage”, held political debates, concerts, and high school graduations, and many more notable events. It may interest you to know that the likes of Garth Brooks, Susan Sullivan, Merle Haggard, Jeff Bridges, Robert Duvall, and many more celebrities have appeared there.

The Apollo Civic Theatre has held a Youth Theatre Workshop for kids from grades four through twelve since 1982. These workshops have proved to be not only popular for parents and children alike but also an invaluable experience as well. The theatres board of directors holds numerous fund-raisers and other moneymaking activities to assist with securing funds to keep this historic institution running. Remembering that the theatre is a non-profit organization and that it is extremely costly to operate, not to mention the immense utility bills, it is vital to keep the cash flow up at all times. This is no easy task and donations and volunteers are always welcome.

The Apollo Civic Theatre is not only rich in history but also rich with quality entertainment for community members of all ages. This magnificent, historical landmark has served as a constant light of hope and source of enjoyment for downtown Martinsburg, WV for many life times and is still serving our community well today. I urge all of you to show this iconic institution your support and go enjoy all that it has to offer. Buy a ticket and see a show. Better yet buy season tickets for you and your family and friends, they would make great gifts too. Remember, “The show must go on.”